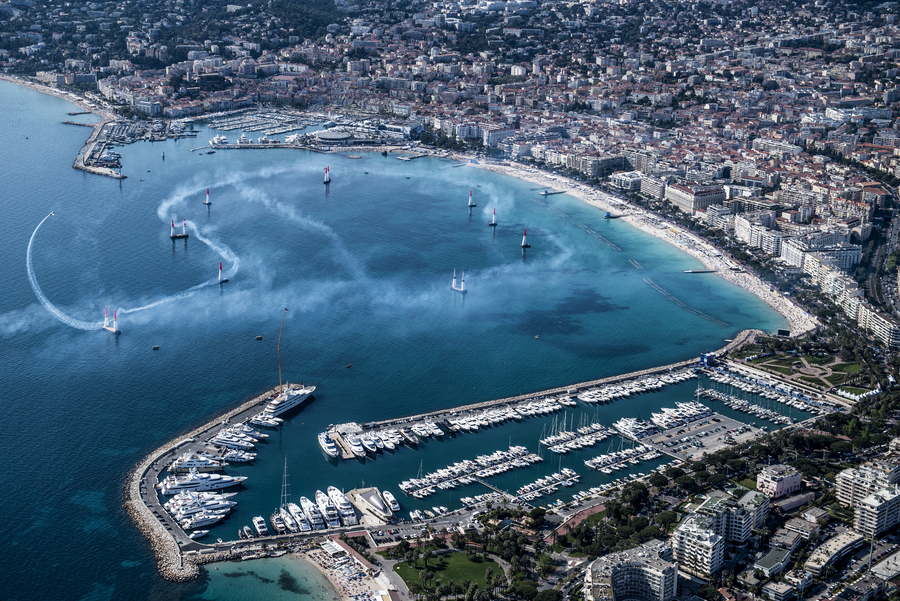 Francois Le Vot of France performs during qualifying day at the second round of the Red Bull Air Race World Championship in Cannes, France on April 21, 2018.

On monday morning, the entire city of Cannes (and around) had certainly a buzzing noise in the ears. Indeed, after 3 days of races, the Red Bull Air Race ended and with it the noise of the engines.

The event, organized for the first time in France, attracted a crowd of 83,000 visitors for three days according to the organizer, including 34,000 just for Sunday.

The event, was served by an extremely favourable weather with a crowd on the beaches of the Croisette to attend the sumptuous air ballet punctuated Sunday, at the end of the finals, by a passage of the Patrouille de France.

During the three days of competition, the best “outfielders” of the world (24 in total and distributed in 2 “class” challenger and master), have faced each other on several rounds. The first day was devoted to test flights, the second day to qualifying rounds. The final, on the other hand, took place on the third day. It is a race against the clock, on a route marked with inflatable pylons, a kind of giant air slalom where each driver must achieve the best time by chaining two round trips.

In Master Class riders, Australian Matt Hall won this grand premiere in France in the Final 4. The German Matthias Dolderer finished second and the American Michael Goulian completed the podium. Japan’s Yoshihide Muroya finished fourth. Only one Frenchman, Mika Brageot, qualified for the Round of 8. In the general classification, the American Michael Goulian remains leader, thanks to his victory in Abu Dhabi with 24 points. The Australian, victorious at Cannes, takes second place with 21 units. Yoshihide Muroya of Japan is third with 19 points.

As for the Challenger riders, the Swede Daniel Ryfa shone throughout the weekend and won Sunday in the final. But it did not happen much with the French Baptiste Vignes, second in the final standings. Italy’s Dario Costa is third. The only woman in the competition, the tricolor Mélanie Astles, finished in a good fourth place.

For my part, I had the chance to participate in this great event thanks to the agency Hypee Communication. As a stage manager, I accompanied the Red Bull communication teams during the filming of the 2 clip promoting the city: Action! Cannes is ready for the Red Bull Air Race

For more information on the Cannes edition and other upcoming races: